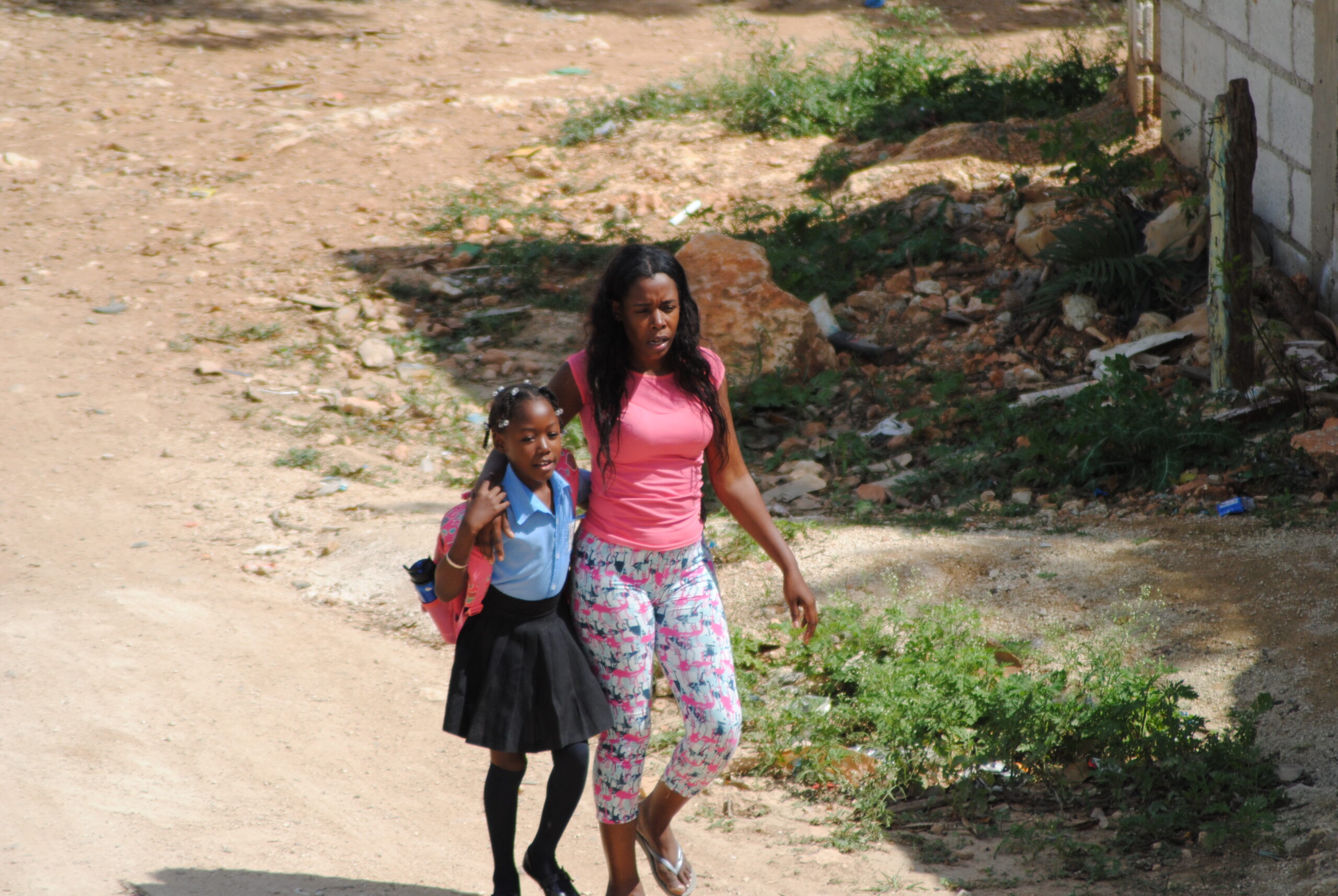 The revolving team, based out of Hampton Bible Chapel in Allegheny County and including a strong Butler County roster, made its biannual trip to the impoverished Caribbean nation Feb. 1-8. Sixteen team members crammed their luggage with 400 pounds of nutrient-enhanced rice (enough to make 1,500 meals), 350 pounds of clothing, 150 pounds of vitamins and an endless supply of hope, good will and faith. “This is a ministry I feel called to,” said Barb Schworm of Saxonburg. “I love the people there.”

In recent years, portions of the Dominican Republic have become hotspots for sunbathers, cruise lines and brides seeking exotic wedding chapels. But in Villa Hermosa — about an hour’s bus ride from the luxury resorts of Punta Cana — the 45,000 residents live in half-built, half-abandoned constructions of corrugated steel and cinder block. Goats roam free, clean water is a precious commodity and flushing toilets are practically nonexistent. Sun-bleached garbage covers weedy lots until someone takes it on themselves to rake and burn it. And the electric service is limited and unreliable at best. At one point during the trip, a live electrical wire fell to the ground and was left unattended by government workers for more than half a day as barefooted children played just feet away. Although the children in this community are well aware of modern social trends like Facebook, common toys here include dominoes, old tires twirled with sticks and kites fashioned from tattered plastic bags and string. Often the youngest children are shoeless or bare-bottomed, while the older children are tasked with caring for their siblings.

Still the people there, who speak Spanish, are quick to tell you they are happy. They’re proud of their families and their faith in God. “Dios es bueno (God is good),” says one elderly woman as she sits — rocking slightly and gently stroking her injured leg — in a church, the name of which, handpainted in tangerine and blue above the door, translates to “The Church of God.”

A community hub, the church is just one of the structures hand-built by volunteers from this mission group since the project was spearheaded by Adams Township resident Dr. Bill DiCuccio and his wife, Marge.

“God put it in our hearts to do this,” said DiCuccio, who used part of the proceeds from his Butler medical practice to help fund the effort, which has also included a two-story school that accommodates more than 450 students; a water treatment plant; and a medical center that offers mainly eye-related care but has provided for the needs of visiting specialists, including dentist and Butler native Kevin Pawlowicz, in August. Other churches and medical professionals from around the United States, including Living Word Free Evangelical Church in Butler and First Baptist Church in Butler, have joined in the effort at different times, bringing specialized skills to the mission. On this particular trip, the team partnered with 17 people from Nashville, Tenn. — mainly students from Lancaster Christian Academy.

“I went because I’m interested in medical missions,” said 20-year-old Summer Austin of Smyrna, Tenn. “I was touched by the way the people there love you when they have nothing, and children are willing to jump on your back or grab your hand.” This trip’s agenda included actual cement and cinder block work beginning what is hoped to become a community and learning center in the neighboring Brisas Del Mar community. A handful of the team members began construction on a building to one day serve as school for elementary and middle school students, as well as a place for occupational training for adults.

But the bulk of the “work” completed on this trip included relationship-building projects, such as a soccer clinic that drew about 50 boys and an interactive children’s program, built on a vacation Bible school type-format. Team members acted out Bible-based skits, then helped each student make simple, daily crafts: sun catchers, sock puppets and wall hangings comprised of wood and twine.

“Construction is sometimes needed, but we see more of a need in building intentional relationships in order to understand their cultural way of living, to present the Gospel, make disciples and support the ongoing efforts of enhancing their lives,” said Scott Prentice, a Butler High School graduate and Hampton Bible Chapel executive pastor. “People need to know they are not alone,” said Marcos Lykins, a Dominican resident with a colorful history that took him from the darkness of drug addiction and violence to the light of full-time mission work.

Lykins, who was born in Ohio, serves as liaison between the visiting mission groups and the community he now calls home. For him, such efforts are both employment and a lifestyle incorporating his entire family. His wife, a bright-eyed Dominican named Mey, helps prepare the food the visiting teams eat. His two sons assist with driving and carrying goods. His 8-year-old daughter, Perla, lights up the mission house with her smile and embraces each visitor every chance she gets.

One-on-one contact, Lykins stresses, is the most important thing the visiting team brings to the community. The building projects are wonderful, he says, but without love, Dominicans can be left confused or even alienated by brick-and-mortar gifts.

The team also treads lightly on gifting directly to the residents. “We don’t want them to see Americans and think, ‘Santa Claus is here,’” Prentice said. Instead, team members jump rope with the children or toss them a ball or Frisbee. Little girls with braided hair surround mission workers who have bottles of nail polish — so enchanted with getting their nails painted, the girls will sometimes walk away, wipe off the polish and vie to be painted again.

The children also may be sponsored through an outside agency, Helping Hands Unlimited (on the Internet at helpinghandsunlimited.org). Julie Vodde of Gibsonia said meeting Rosanna, the 10-year-old girl she has sponsored for two years, was a highlight to her journey. At first, Vodde said, Rosanna was hesitant. But by the week’s end the little girl had written Vodde a letter so that she could know more about her and requested a picture of Vodde to keep. “That, to me, was exciting,” Vodde said.

Each of the mission workers gives up a week of his or her life, the comforts of a hot shower and a working cell phone, and pays $1,250 in travel costs. The travelers risk the possibility of being sickened by the food or water or bitten by insects or animals. Vodde, for example, found a centipede that can kill with its venom in her shoe. Yet some team members, such as Schworm, find themselves returning time and time again.

“You bring it home with you because you look at things differently. You appreciate things more,” said Schworm, who has made the trip 10 times. “You can bring the joy of a people who have nothing and live with simplicity to a world full of complicity here.”