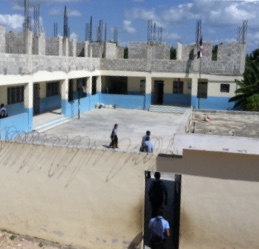 Group on mission to Dominican village

“Villa Hermosa” translates from Spanish to English as “the beautiful village.” But for this one small barrio in the Dominican Republic, the greatest beauty lies in its inspiring people. The living conditions there, said Butler County’s Dr. William DiCuccio, were “anything but beautiful” when he and his wife, Marge, first visited a half dozen years ago. The community lacked even the most basic resources, including clean drinking water and sewers.

But it had a spirit that captured DiCuccio’s heart. And now, years later, DiCuccio helps orchestrate a plan to transform the village. At least twice a year, a group of volunteers from the Dorseyville Alliance Church, the church DiCuccio attends in Allegheny County, travels to Villa Hermosa to put the vision in motion. The group already has helped expand the local church, and it built a school. And, for a week beginning Friday, the crew returned to continue building a community water purification plant.

This 19-person entourage includes Butler Eagle reporter Kim Paskorz Cassady. DiCuccio invited her along to experience the effort and report back to his hometown.”I look at everything in life as not being by chance,” DiCuccio said. “God put people in my life. He gave me the resources, and He blessed me.”

Nearly 10 million people live in the Dominican Republic, which is about the same size geographically as Vermont and New Hampshire combined: 18,815 square miles. Comparatively, about 2 million people live in those same two states.Agriculture — sugar, coffee and tobacco production — traditionally fueled the Dominican’s economy. But in recent years, the service sector, made up of tourism and ecotourism, has taken the reigns as top employer.Still, The World Health Organization estimates per capita income in the Dominican Republic at the equivalent of $5,500 a year.

Call DiCuccio’s cellular telephone and the personalized hold music you will hear is Frank Sinatra crooning about how he did it, “My way.” That could very well be the theme song for DiCuccio’s “retirement.”

His longtime general and geriatric medical practice was passed to his son, Bill DiCuccio of Butler, in 2005. But the elder DiCuccio still serves as medical director at the Sunnyview Nursing and Rehabilitation Center, the county-owned nursing home in Butler Township. And having just returned from a two-year residence in Italy, DiCuccio now splits his time between his home in Adams Township and his mission in the Dominican Republic.

“I used to be a good golfer,” DiCuccio said, laughing about the pastime lost in his passion to help others. Perhaps it was the famous year-round golf courses that first drew DiCuccio to the Dominican Republic’s Casa de Campo resort area. DiCuccio and his family visited there more than a dozen years, spending as long as three months at a time, elbow-to-elbow with what DiCuccio calls “the wealthiest of the wealthy” at the plush resort.

The couple, while there, befriended bell captain Santiago Gil. “We trusted him,” DiCuccio said. In 1998, Hurricane Georges damaged the resort and left Gil without a job. He then turned his life over to the ministry, and in 2004 invited the DiCuccios to visit his church: La Iglesia de Dios, located in the Villa Hermosa.

Marge DiCuccio donated her income tax return check to Gil’s church so it could buy musical instruments and a sound system. A year later, the DiCuccios made their first trek from the plush resort ripe with celebrities to the tiny town of 4,500 people, mainly squatters. Not even noted on many maps, Villa Hermosa is in the province of La Romana, about 70 miles east of the Dominican Republic’s capital city of Santo Domingo.

“They treated us like royalty,” DiCuccio said. “When we left, my wife and I did not talk to each other for an hour. And when we did talk, the first words out of my mouth were, “We have to help these people.”

DiCuccio teamed up with World Servants of Minnesota, which serves as the general contractor to the construction projects. According to its Internet site, World Servants coordinates faith-based mission trips throughout the world, but “What is unique about the (Dominican Republic) is that severe poverty and modern conveniences mingle together. … The poverty will break your heart, but the attitudes of the people living in these communities will give you a whole new perspective on the truly valuable elements of life.” Not only does DiCuccio recruit people from his church on the mission, but his own family pitches in when possible.In addition to his son, DiCuccio’s daughters contribute. Tina DiCuccio is a pharmacist in Butler, and Kimberly Heckert is an expert in treating strokes.”I strongly believe God wants us to have a purpose-driven life,” DiCuccio said. “And there is an insatiable need in this world.”

After helping to expand the local church, which serves as heart to the Villa Hermosa community, the group built a school for 225 children, preschool through age 9. The children who attend classes together for much of the year also receive food, immunizations, clothes and vitamins while there. The school employs five full-time teachers, two part-time teachers, a psychologist principal, and a secretary and cleaning person. They’re all local residents.

The group now is working on a water purification plant.When finished, the plant will produce “fuente de Salvacion” brand water. Capable of producing 2,300 gallons every two hours, the clean drinking water will be bottled in five-gallon containers and sold at cost to residents. When the water plant is completed, the church and school both need to be expanded. The hope is to add a second floor to the school for older children. And high on the priority list is the construction of a medical clinic, which is in the works. The World Health Organization says external injuries and communicable diseases are the leading causes of death in the Dominican Republic. Diseases practically negated in the United States, such as malaria and tuberculosis, still are realities there.”I want to change the whole village,” DiCuccio said. “This is what God put in my heart to do.”

Barb Schworm of Saxonburg, a nurse at Allegheny General Hospital in Pittsburgh, leads the group of 19 volunteers now in Villa Hermosa. She is one of four people in the group who has made the trip before. This is her fourth visit in two years. This particular group has members of various ages, the youngest being 14 and the oldest about 50.

Trip planning, Schworm said, usually begins three months in advance. Volunteers must have passports, but do not need visas. They are encouraged to get tetanus and Hepatitis A inoculations before travel. It’s also helpful, but not necessary, to speak some Spanish, which is the native language.

Schworm said the skills people take with them often vary. “We have various skills going each trip. This trip we have a nurse, student pastor, secretary, several construction workers, machinist, musician, bus driver for port authority and several high school students,” she said in a written correspondance during travel preparations.

Group members brought with them mainly items for the school children, including snacks and crafts.”From the work perspective we supply the gloves, man power and some small tools like trowels,” she said.The group flew into Santo Domingo airport and then traveled by bus or van to modest accommodations. The women will stay in one room, the men another. They were told in advance they will have no hot water for bathing, and they’re instructed to bring a flashlight as the availability of electricity. Blackouts are common.

The group, Schworm said, has never encountered any work site injuries. However, volunteers have contracted the flu, and once, a volunteer was hurt by stepping on a sea urchin while visiting a nearby beach. “Everyone comes back changed in different ways,” Schworm said. “Two or three people want to move to the Dominican full time. Life is harder there but also more peaceful and simpler. … The work is very significant on these trips, but the people we come in contact with and the children are why we go and who we want to serve.”

Schworm in her own testimonial posted to the church’s Web site, wrote, “The hardest times for me were seeing the children alone in an abandoned building or eating a piece of sugar cane for breakfast that was so dirty you could hardly tell what it was. It was hard to tell if these children had homes or if the community just cared for them.”

Trip of a lifetime

Bob Boyd, 52, of East Butler last summer joined a group of 25 volunteers, which traveled to Villa Hermosa. He is not a member of the Dorseyville Alliance Church, and he has never met DiCuccio. A cabinetmaker by trade, Boyd said he got involved with the trip because he is handy and he is good with children.He called his visit “the trip of a lifetime.”

“Growing up, you watch TV and you hear stories and you see poor people in this area. But this is different. People there have nothing. Absolutely nothing,” he said.” It will be a life-changing experience, but I can’t tell you what to expect. You have to see the sights, smell the smells and visit with the people. … It’s just amazing.”

Boyd’s group built walls for the water plant the current crew will work on during this trip. Eventually, the plant will be run by a few local employees. A

different crew from the church group already has been assembled to continue the project in July. More crews will follow.The hope, DiCuccio said, is the children who are getting an education at the school past volunteers built will return to their community and improve it later. Ultimately, the hope is the circle will perpetuate itself “long after I’m gone,” DiCuccio said.